Beamish Museum is an open air museum in England. It has been around for quite a while and now is planning to expand. The project is expected to cost around £18 million and will bring around 100 new jobs related to construction. The project is titled ‘Remaking Beamish’ and is the biggest project in the 48-year history of the museum. 30 new exhibits are planned to be added, which will include a 1950s town and farm, along with a Georgian cottage and a coach house.

The new project will create around 100 construction jobs which will also include construction apprenticeships which will provide a great opportunity to learn alongside skilled and experienced mentors. The work has already started and is expected to finish around 2021.

Project Beamish is quite big and around 30 people from different trades will be working simultaneously on four building sites at any one time. The 1950s town will also include a cinema which is being moved from Sunderland. It will also include a community center, homes, shops, café and other similar structures.

The project is expected to create around 100 new jobs and training opportunities, including up to 50 apprenticeships.

Spain’s Field Farm, from Weardale, has been de-constructed and will be rebuilt at Beamish to tell the story of rural life in the 1950s.

The expansion of the 1820s Landscape will include a coaching inn where visitors can stay overnight.

There will also be a recreation of murdered Joe the Quilter’s cottage.

The extension is expected to attract an extra 100,000 tourists to the region.

The museum will remain open throughout the building programme.

Link to the original article: http://www.chroniclelive.co.uk/news/north-east-news/around-100-construction-jobs-created-14124990

The Importance of Health and Safety Training

Some Roofing and Cladding Laws and Regulations when Working at Heights 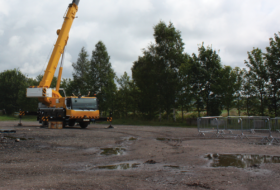